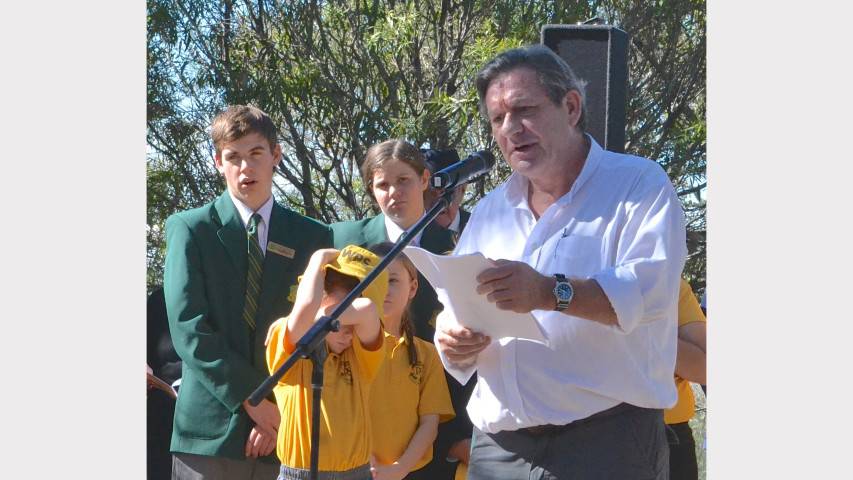 I am honoured to have been asked by the Friends of Myall Creek Memorial, to be today’s guest speaker. Back in 2009 I was awarded the Visiting Fellowship at the National Museum of Australia in Canberra. In order to do further research on massacres in northern NSW and across Queensland and into the Northern Territory, I drove the two and half thousand kilometres from Cairns to check out the ‘lie of the land’ and photograph massacre sites, and I paused here, at Myall Creek on my journey south.

Unlike today, I was the only living person wandering around this thoughtful and respectful memorial site, which due to the way it has been laid out, high-lighted the unique spiritual presence of the location. A hundred and seventy one years after the bloody event that took place on the plain below us, I felt an odd blend of empathy and compassion for the brutally murdered victims; horror at the cold-heartedness of the white bush workers; and a sense of doom for what I knew lay ahead for the Indigenes whose traditional lands were to the north of here. To me, this site bespoke 50,000 years of human occupancy by our original Australians imbued with an all-pervasive, integrated religious belief system, inextricably linked to the land; a perspective that was catastrophically disrupted with the invasion of their traditional lands of the Wirrayaraay. It has rightly become a site of National Heritage and offers the nation a symbol for reconciliation.

In June of 1838 a mere 50 years had passed since the First Fleet arrived at Sydney Cove. The European land-grab had expanded out from Sydney Town and the original 19 counties, over the Great Divide and up the Hunter Valley and the Valley of the Three Rivers from Port Macquarie and Grafton. Myall Creek was not the first or the last massacre to take place on the NSW frontier, but it was the first and only time that the perpetrators were held accountable and hanged. More importantly in the long run it heralded a major change in the attitude of the frontiersmen: the killings continued, but the whites kept quiet about it. Thus began Australia’s ‘conspiracy of silence’.

The 1840s saw European settlement rapidly expand into what became the Darling Downs and with it a constant series of violent clashes with the original land owners. It was towards the end of this decade that the New South Wales Native Police, commanded by Frederick Walker rode onto the scene. From the Macintyre River to Wide Bay, Walker and his troopers shot any Indigenous clan groups who were perceived as threatening the economic viability of the new settlers and their herds or flocks.

A year and half after absorbing the NSW Border Police, in 1861, the newly created Queensland Native Police were receiving particularly bad press and their cold-hearted violence was attracting censure.

An Inquiry was established by the Queensland colonial government which the Moreton Bay Courier damned as a ‘whitewash’ – and it was.

Then in October an event took place that totally distracted the public’s attention. The newly arrived Victorian squatter Horatio Wills and party were massacred by the local Kairi who had mistaken Wills for the owner of Rainworth station, who with the Native Police had killed members of the Kairi after wrongly assuming that they had stolen a flock of sheep.

Seven Native Police detachments rushed to the area and at least 370 Aboriginal people of the surrounding region paid the price for the 19 whites killed at Cullin-la Ringo.

The frontier kept moving further north – during the 1860s to the Gulf of Carpentaria, and onto Cape York Peninsula in the 1870s. With gold rushes to the Palmer River and then the Hodgkinson, there was a surge in the need for meat, and hence more cattle runs closer to their goldfield markets.

We have Sub-Inspector Frederick Urquhart who was involved in both these regions, leading his troopers – according to the euphemism of the day – in ‘dispersing’ large numbers of clan groups, between 1882 and 1889.

He was involved in the Cloncurry/Kalkadoon killings, later at Mistake Creek in 1884 and the Mein killings on Cape York in 1889.

This was a man who then transferred to the Queensland Police force and who, in 1912, had lead mounted charges against white strikers on Black Friday.

By 1917 he had risen to the position of Commissioner of Police, and retiring in 1921 was appointed administrator of the Northern Territory.

You can’t glorify the settling of Australia without glorifying the methods used to do the settling… my forebears were involved in a long-running series of frontier wars as each district was violently subdued, the colonial Europeans and their para-military Native Police, went on to ‘pacify’ the next. Our ancestors fought a guerrilla war which colonists at the time, readily admitted was a war on the frontier.[i]

And yet some white-fella’s are still pedantically arguing that it wasn’t a ‘real’ war. There is, as Raymond Evans has noted a “…public tendency to evade and elide – to ignore, deny and even erase less palatable aspects of the national saga.”[ii]

Following-on from this fabrication this approach enabled the treatment of our Indigenous people to be side-lined and ignored in the 20th century.

Massacred on the “moving” 19th century frontier and incarcerated in concentration camps designated missions or reserves, the plight of our Indigenous people, certainly in Queensland, continued until the demise of the department that controlled every aspect of their lives, up until 1986.

Australia’s pre-contact Indigenous population has over the last 30 odd years been re-assessed, particularly as a result of the work of the economic historian Noel Butlin, who noticed that previous estimates had not factored in the devastating depopulation caused by smallpox and other infectious diseases in the tribes of the south-eastern part of the continent that the new-comers called NSW and Victoria.

It now seems more accurate to suggest that the original pre-contact Aboriginal population was between 750,000 and a million.

Utilising Butlin’s and others’ work, a colleague of mine, Robert Ørsted-Jensen has estimated a minimum Aboriginal population prior to contact, on a state by state basis.

This suggests that numbers killed on the moving frontier were much, much greater than previously thought.

So how do we interpret this?

Well, obviously it has been white historians who have written about the expansion of white settlement and in the process virtually ignored the original inhabitants.

From my research I noticed that this process began in the late 19th century and became the ‘norm’ in the 20th.

White academic historians, particularly after World War II, were primarily located in the urban centres of Melbourne, Sydney and Canberra, and concentrated their writings on the activities of where the white people settled; so that they were not only southern-centric, but also euro-centric. Theirs was not a history of Australia, but a history of Europeans in Australia – for they failed to consider where the majority of Australia’s population was originally located – Queensland and Western Australia.

But even then, it missed the pivotal theme of frontier terror, violence and fear. All of this, despite the numerous publication of recollections of the ‘pioneering days’ that clearly identified what had gone on. Nevertheless, the 20th century historians, in trying to fabricate a national story perpetuated the myth of ‘peaceful settlement’. I suppose this should not surprise us, as it has always been ‘the victor who writes the history.’ However, at the start of the 21st century do we really want our history to be permeated by this form of distortion?

A criticism that has been levelled at several of my colleagues is that they haven’t consulted Aboriginal people about frontier violence or the frontier wars.

I began my initiation into the truth about our history when teaching Aranda children on the edge of the Simpson Desert in Central Australia, where I learnt about Aboriginal stockmen being whipped by their white overlords and heard the whispers of Coniston 50 years after the massacres.

On the west coast of Cape York Peninsula I heard the late Kokoberrin elder, Kenny Jimmy tell of the massacre of his people at Cattle Creek: ‘till today you can still see the bone’.

I have travelled with Aboriginal Rangers and Elders and heard many oral history recollections, on Mornington Island, Doomadgee and Lawn Hill.

I have heard about the ‘Dutches’ trying to take women against tribal law and paying the price with nine being speared by the Wik Ngathan near Aurukun, some 400 years after the event.

I have sat and listened with Kowanyama ‘old men’ at the mouth of the main Mitchell and heard them sing of the Storied past.

I have interviewed elderly Yidinydji and Djabuganydji and sat around the campfire and learnt from the other side of the frontier.

Like so many other migaloo I have learnt from the original inhabitants and felt the ancient rhythm of this land which together we call Australia.

Recognising the truth of our history, from the frontier wars, ugly violence and rape, to the dictatorial control of the 20th century concentration camps,[iii] euphemistically called missions and reserves, we can more honestly acknowledge these, as well as the aspects of which, we can more readily, be proud.

This is what a 21st century Australia has to synthesise and honestly come to terms with.

[iii] This was not the case with the west coast Cape York Peninsula missions as they were established to stem the killings.

Become a member or supporter